The mountain welcomed us back to Hart’s Pass just as we left it- drizzly rain, thick fog and a chill in the air.  About a quarter of a mile before the trailhead, we noticed a colorful little note beneath a rock in a sandwich sized Ziploc bag, “Trail Magic for SOBOs only – Broken Toes.”  Our first legitimate trail magic!  With a fresh pep in our step, we high tailed it like greedy children on Christmas morning.  We easily found our way to a cozy campsite with a tarp awning, inviting fire, and an elfin young man who goes by Broken Toes.

Broken Toes, Jason and I. Don’t be jealous of my super fashionable rain kilt.

Broken Toes had been posted up at the trailhead for over three weeks, treating over a hundred hikers to hot tea, delicious (a.k.a. not freeze dried) meals, resupplies and the ever valuable shake-down.  As a former thru hiker of both the PCT and Appalachian Trail, Broken Toes offered to go through a hikers gear and remove superfluous items thereby lightening the load.  The previous day, he had “shaken down” 10 pounds off a woman.  When we arrived, our intent was to stay for maybe 20 minutes, warming ourselves by the fire.  An hour and a half later, we finally hit the trail, bellies full of scrambled eggs, sautéed with onions and mushrooms, served on a slice of Dave’s Killer Bread. 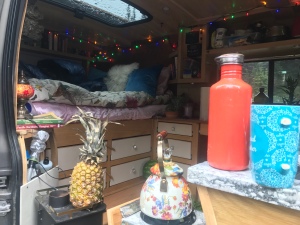 Broken Toes has been living the van life for 3 years. He estimates he’s spent 3,000 hours customizing his sweet home on wheels.

Finally, sixty miles in, we were breaking new ground and headed South for the duration.  The weather cleared and the views where astonishing as we skirted the sides of steep, high mountainsides which gently rolled and climbed.   Since the beginning of our hike, we had been playing leap frog with three entertaining forty something guys, Doobie (self-explanatory trail name), Greg, and Justin.  As we approached a steep snowy stretch, we could make out three bodies in the middle of the snowy traverse, working at something with an ice ax.  Knowing Doobie was behind us, this sight precipitated my first pang of snow inspired fear, a harbinger of what was to come.

As we drew closer, it became clear that Jack Rabbit, a seasoned snow traveler, was hacking a safe path across the narrow, unstable trail. Apparently a woman, Hilda the Kiwi, had somehow slid down the side of the mountain during her crossing.  After helping her scramble back up to the trail, Jack Rabbit took it upon himself to firm up the path for those that followed. My hero! I continue to be impressed by the comradery and generous spirit of my fellow hikers.

Jason crossing a snow patch, though not a treacherous one. Too busy watching my step on those to take photographs.

On we hiked, feet soaked from the countless rivulets of snow melting from above. As we moved higher on the mountain, we passed through more snowy sections and eventually came to Cutthroat Pass. I moved slowly and methodically, placing each step firmly in the footprints before me. As a Chicago area native, I’m not phased by snow, per se. However, I am phased by the slippery white stuff atop mountains, of unknown depth and dubious integrity, under my trail runners. Next to being physically fit enough to tackle the trail, snow travel has been my greatest concern about our southbound trip. No amount of YouTube videos on self-arrest, or American Alpine Club articles on the finer points between kicking steps and a diagonal ascent, can adequately prepare you to reflexively deploy an ice ax the first time you find yourself cascading down a slick slope. I purchased an ice ax, but chose not to bring it, confident I’m more likely to impale myself with it rather than use it correctly.

With the July afternoon sun perpetually erasing the imprints, the trail was not easy to identify – the wavy, soft surface seems oftentimes to mingle with the wilting, hits old footsteps of the morning hikers. I knew I needed to continue up the pass, but the route was unclear. I chose a path, took a step, and down I went. Posthole. To posthole is to have you’re leg punch through the snow, generally unexpectedly, leaving you in it anywhere from your calf to your chest. Lucky for me, I was only in it up to my left knee. Unlucky for me, I was on a thirty degree slope and had fallen backwards. My foot was stuck and I lacked the core strength and leverage to pull myself up.

This is when I was grateful to have my hiking partner within earshot. “Jason. I need your help. If you could hurry, I would appreciate it.” He made his way down to me and he began digging me out. After giving my leg a painful yank, he determined my foot was stuck under a rock. Digging a bit more, he created enough room for me to dislodge myself and roll unceremoniously backwards down the hill. Free at last!

While not life threatening by any stretch, my posthole incident definitely heightened my sense of fear. More experienced snow travelers we spoke to were dismissive of the conditions as benign and low consequence. As a novice, however, my little incident left me uneasy and nervous about the snowy trail ahead.

A couple of days later we arrived at our first resupply stop, Stehekin, a resort town of a mere 75 residents on Lake Chelan, reachable only by foot, ferry or float plane. Here we would mingle with squeaky clean tourists soaking up the mountain sunshine on the deck in front of the restaurant and general store. In the shadows of the bourgeois, we waited in line with other dirty hikers to use the pay-by-the-minute shower, washing machine & dryer, and free public phone (no cell service). Glorious civilization!

Rumors spread like wildfire among hikers, both in town and on social media. Objectively, the next section of trail, 108 miles from Stehekin to Stevens Pass through the Glacier Peak Wilderness, would be the most challenging of the entire trail. The word was that the snow was still treacherous, aside from the brutal elevation changes, blow downs (trees across the trail) and eye-high brush gauntlets. Justin, a section hiker, was the first to opt out, deciding he wasn’t comfortable with the conditions. Then, Hilda decided she would skip ahead to the next section.

With all these seemingly sane folks deciding the risk was too high, I began questioning my own ability to take on these challenging miles. Jason and Doobie talked me down, pointing out we’d already been through some sticky situations with no problems and plenty of folks had already made it through in the previous weeks with more snow than was currently present. For the moment, I was placated.

Jason and I, still transitioning to hobo living, couldn’t resist escaping the dusty Stehekin campsite for a extravagant hotel room- extravagant being relative, of course. Freshly showered, lazing on the pillow top mattress perusing Facebook, I was seized with fear. Terror. I want to vomit.

A hiker who had just arrived in Stehekin posted a trip report on trail conditions in the section we were to begin. Essentially, he described a perilous route covered in snow that was not for the faint of heart or inexperienced. In fact, he said he was experienced and still found the conditions made for a slow, dangerous slog.

Damn you, Facebook! You insipid, toxic echo chamber! I was immediately paralyzed, stomach in knots, fully descending into a bottomless fear spiral. Jason attempted to reason with me, allay my anxieties, but the rationale part of my brain was unreachable. Instead, I was consumed by worst case scenarios and soon began planning our bail out. A ferry to Chelan to a bus in Wenatchee to another bus to Stevens Pass. Whatever it took, I was not going to be a red splatter at the bottom of a snow covered valley.

If however, I opted to skip this section, what would that say about my ability to hike the whole trail? If I took the easy way out now, only a week in, what were the chances I’d make it through the next seemingly insurmountable hurdle? Clearly I was in over my head and should buy my plane ticket home.

After an hour or two of internal chaos, we decided to get some fresh air. We ran into Doobie on the lakefront and I immediately cornered him, wanting to validate my fear driven logic. After venting my concerns, he reiterated his position, adding that folks on the internet (especially men) have a tendency to exaggerate accomplishments in order to bolster the author’s ego and accomplishments. This is an argument Jason has also made and, while I don’t understand the point of such hysteria inducing bravado, the fact that both men pointed this out began to ring true and bring me back to earth.

As I continued to hem and haw over my decision to bail or go forward, Jason suggested we take another day in Stehekin to, purportedly, let the snow melt. Despite the mid-nineties temperatures we were experiencing by the lake, the reality is that a single day of melt would have little impact on the conditions we would encounter. The mind, however, is a funny thing and that idea of an extra day was all it took to deflate the balloon of terror that was consuming me. Like that, sanity returned, I was fully present, and the possibility of conquering this trail, in its entirety, was again in reach. So, I returned to playing tourist and enjoying our little Shangri-La, at least for another day.

9 thoughts on “A White Christmas in July”